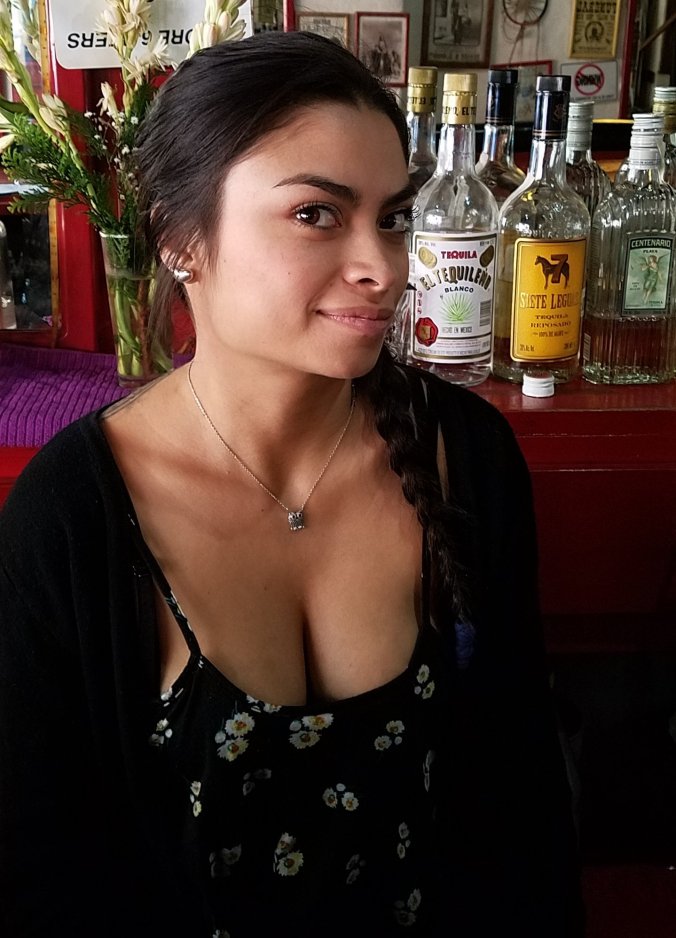 On a recent trip to Mexico I had occasion to visit the sleepy little town of Ajijic located in the state of Jalisco. Ajijic is nestled between the Sierra Madre Mountains on one side and Lake Chapala on the other. It is a sad little town that lends itself to cobblestone streets, broken sidewalks, and broken dreams. I was staying at an Airbnb owned by an American ex-pat by the name of Luis. He ran the place with his partner Norma. Norma was a native and spoke only Spanish. I spent three weeks in Ajijic over the Christmas and New Year’s Holidays and got to know Luis and Norma pretty well.

I spent most of my time exploring this colorful little town which was full of shops, bars, and restaurants. One day as I was walking back from the Malecon I stopped in a little bar called La Tia. It had red and white walls on the outside with an American flag hung on one side of the entrance and a Mexican flag hung over the other. Music was pouring out the front entrance from a sound system hidden somewhere in the recess of the tiny bar. It looked rather inviting and I was thirsty, so I stumbled there inside.

There was a gentleman sitting on a bar stool in the middle of the bar. A couple was sitting at a table towards the back. I went in and sat a couple stools down from the guy at the bar.

A cute little Mexican bartender flashed her pearly whites. She had long black hair past her shoulder and was wearing a green plaid shirt with several of the top buttons undone. “What would you like to drink?” She asked in perfect English.

She got my beer and set it down in front of me and went back to her perch. She was talking to the other guy but he turned to me and included me in the conversation.

“Where are you from,” he asked.

He nodded his head. “I’m from Oregon. Been down here about a week. Waiting for my girlfriend and her daughter to show up. You been here before?”

“Oh, yeah! We love it! The weather is good, food is great, and the price is right. Most of the locals speak English.”

“Yeah, I heard the natives call it, “Gringo Land.’”

He laughed. He had a bottle of beer sitting in front of him and a shot of tequila. He downed the tequila and chased it with a slug of beer.

We all got acquainted and had a nice conversation. The girl’s name was Anna and I was becoming quite taken with her. I snapped a few surreptitious pictures of her.

“It’s called 21. You roll the dice. There are three winners. One who calls the shot. One who pays, and one who drinks the shot. Do you want to play?”

So, we each took a turn in rolling six or seven dice out onto the bar from a leather cup. Each time Anna counted the tops of the dice. I won the first roll so I called the shot.

“What shot do you want?” she asked pointing to the bottles of tequila behind the bar.

“What are you drinking?”

She pointed to a bottle.

She poured out a shot and set it on the bar in front of us. We rolled some more. First the guy from Oregon, then Anna. At the end of the game the Oregon guy drank and paid for the shot I called. We all laughed and he left. So now I had Anna all to myself.

“So, there this New Year’s Eve Party at Perry’s Pizza I am planning on going to. Do you know it?”

“Si. I have been there before. They have good food.”

“Do you have any plans for New Year’s Eve?”

“Would you like to come with me as my guest?”

“No, I have two left feet.” She laughed.

Which wasn’t true. We exchanged telephone numbers and became friends on Facebook so we could use messenger to coordinate our rendezvous and sure enough when she showed up at the party and we had a great time and danced all night!

She was a beautiful girl and I went back to bar several more times while I was in Ajijic to see her.