The Pope has just delivered a message in which he openly states his support for democracy…We have been waiting many years for the leading spiritual authority of the day to condemn dictatorship in no uncertain terms. We have been waiting all this time for someone to speak out and clearly identify the sources of evil as the Pope has now done. We wished for this to be said when evil reigned triumphant and the forces of good remained muzzled.

At least we have this message. Our world does not need tepid souls. It needs burning hearts. The Christians of the first century were not moderates.

-Albert Camus writing in Combat in 1944. 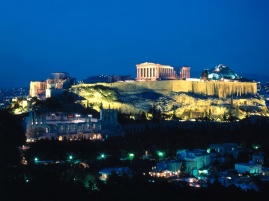 It seems the phrase, “a city upon a hill” has been misappropriated all over the place.  It was most recently ascribed to Ronald Reagan who used it to describe America. He probably got it from his speech writer Peggy Noonan who has lifted other memorable quotes from the pages of history. She likely got it from John F. Kennedy who also used it to describe America. It was first used in America in 1630 by a former Governor of Massachusetts, John Winthrop, in a speech wherein he describes American exceptionalism based on the concept of manifest destiny.

The actual origin of the phrase is biblical, Mathew 5:14: “You are the light of the world. A city set on a hill cannot be hidden.” I believe the origin to be even earlier found in Plato’s Republic. Plato describes the City-State as the perfect form of government and a philosopher-king as the perfect ruler. Plato uses Athens as an example describing it as “city set upon a hill.”

So you see, there is really nothing new under the sun. Everyone steals from everyone else.

I am reading this new book by Karen Armstrong called, Fields of Blood: Religion and the History of Violence. It is really putting a lot of things into perspective for me. Turns out, until recently, religion and statehood were completely intertwined. State violence has been the order of the day since the beginning of civilization.  Nationalism and religion went hand in hand and violence was completely justified as a way of survival by the ruling elite who quite often were the priests and the prelates.

Here is a quote from the book which I quite like.

We are flawed creatures with violent hearts that long for peace.

According to no less a legal authority than Supreme Court Justice Antonin Scalia, the function of the grand jury is not to inquire upon what foundation the charge may be denied or to otherwise try the suspect’s defenses, but only to examine upon what foundation the charge is being made by the prosecutor. As a consequence, neither in this country or in England has the suspect under investigation by the grand jury ever been thought to have a right to testify or to have exculpatory evidence presented.

Furthermore, prosecutors work hand in glove with police in prosecuting their cases. They depend on their testimony, their evidence and their cooperation. There is an inherent bias favoring law enforcement by prosecutors. Prosecutors can manipulate the grand jury in any decision they want. Having prosecutors investigate the police is like having the fox guard the hen house.

I would suggest there has been a misuse, indeed an outright abuse of the grand jury system by prosecutors in the Michael Brown and the Eric Garner cases rising to the level of prosecutorial malfeasance. The only reasonable solution to this problem of the investigation police officers who kill unarmed citizens is to appoint a special prosecutor unencumbered by by bias, mutual obligation, and racial animus.

The Ballad of Ted Cruz