Not really a horror fan but every once in a while one will catch my fancy. Suspiria (2018) is just such a film. It is, I would say, a notch above the rest. Maybe two notches. It has everything going for it. Great writing, directing, acting, music, dance, costuming, art direction, and social consciousness. It has been described as an extraordinary work of art, grotesque, and savagely beautiful. Others have called it pretentious drivel. But, hey, it’s horror film. What do you want? At least it’s very artsy drivel!

Directed by Luca Guadagnino, it is a reimagined version of the original Suspiria (1977), a horror film cult classic, directed by Dario Argentento, which I must say I haven’t as yet seen, but I plan too as soon as possible. This version, at 152 minutes, is 54 minutes longer than the original. So, it is not only reimagined it is also greatly expanded as well. Coming in at just under three hours is pretty long for a movie, but I must confess, I didn’t notice it at all, as I was totally engrossed for the entire time.

The setting of the film is in divided Berlin in 1977, when the Baader-Meinhof Group was perpetrating terrorist acts all over the city. Rain drenched Berlin and the memory of the Third Reich hang over the Markos Dance Academy which is ruled by artistic director Madame Blanc (Tilda Swinton) and the grand dame Helena Markos. Patricia, a young student at the academy is convinced that the place is being run by a coven of witches. She tries to convince her psychoanalyst, Dr. Klemperer, who thinks she is delusional and so writes in his notebook. She disappears. Another dancer, Susie Bannion (Dakota Johnson) arrives on the scene fresh off a farm in Ohio. She auditions for a place in the Academy and greatly impresses Madame Blanc who immediately slates her as lead performer in her masterwork, “Volk.” During her audition, another dancer (Olga) who stormed out over a disagreement is trapped on a floor below in a mirrored rehearsal hall and is banged around and contorted with each dance move Susie makes until she is a pile of broken bones and a puddle of urine and saliva. One of the more horrible set pieces.

This film is a feminist manifesto after a fashion about the empowerment of women. Other than the two cops who are sent to investigate the disappearance of Patricia, there are no other male actors in the movie, Lutz Ebersdorf not withstanding. If you are not in on the joke, I won’t spoil it for you here. The women cast a spell on the detectives and humiliate them unsparingly while at the Academy, then wipe their memories once they return to the station.

Thom Yorke from Radiohead provides a hauntingly throbbing soundtrack to the horror which accompanies the dance routines. The film incorporates stylized dance sequences choreographed by Damien Jalet. Volk is a dance created at the Academy that featured Blanc in the original role of the protagonist, the part Susie was auditioning for when she turned Olga into a human pretzel earlier in the film. And it’s actually based on a performance Jalet choreographed in 2013, called Les Meduses, that was staged at the Louvre.

The title of the film Suspiria, means sigh, as in the sighing of pain, or suffering.

Tilda Swinton alone is cause enough to want to see this remarkable film. She plays three characters each of which represents an aspect of the human psyche – the id, the ego, and the superego.

This movie is not for everyone. Not for the squeamish nor the faint of heart. But if you like a good horror show, one that makes you think, and is well crafted, and beautiful to look at and listen to, then I recommend Suspiria.

Autumn is a second spring when every leaf is a flower.

So, I decided to take a walk in the park, This is what I saw: 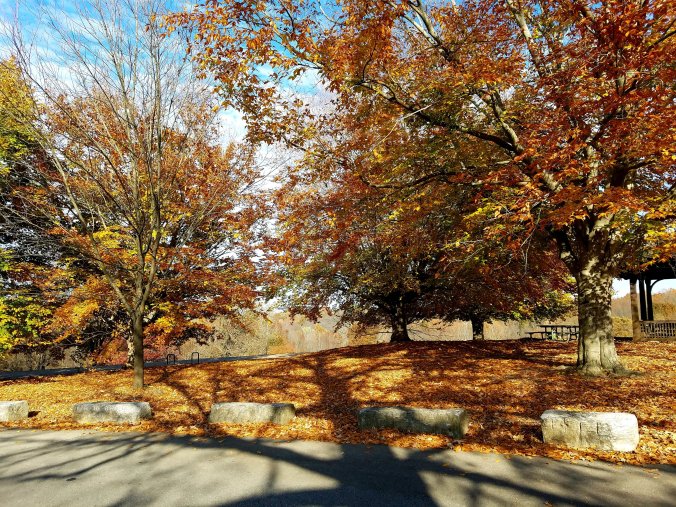 Pavilion at the Top of Dog Hill

Is that a Dagger I See Before Me?