I was having breakfast in one of my favorite hamburger joints, Burger Boy, down on Burnett Street. I was concentrating on my reading when I noticed a shadow falling over me and a rush of wind as someone walked past. I looked up and caught the figure of a young woman in a black leather jacket. She walked up to the lunch counter and sat on one of the stools that had seats covered in red vinyl.  She ordered some food and then stepped outside to smoke a cigarette. She never came back. She left behind her leather jacket and her purse. The jacket she set on the stool and the purse she set on the counter.  When she spoke to the counter person, she ordered breakfast to go: scrambled eggs and hash browns with rye toast. As I recall, officer, when I looked up from the book I was reading, I noticed a single black female, short in stature, with long black hair and fake eyelashes. She was wearing a black ball cap with the black leather jacket. The jacket had silver studs on the collar and along the half circle for each of her shoulders. She had on tight blue jeans and brown suede fringed moccasins that went half way up her well-shaped calves. There was a red leather purse with a gold chain sitting on the counter in front of her. It’s still there. I figured her for a pretty wild character. Judging by the way she was dressed she might have been a working girl. Although I, doubt it. She had an air of confidence about and looked like she wouldn’t take shit from anyone. Especially a pimp.

I noticed just before she went outside, she kept glancing at her cell, scrolling through her messages. Yeah, she might have been an independent all right. When she turned around to leave was when I witnessed and felt the full force of her great beauty. She was quite a looker. Shame about what happened. Do you think you will catch the guy? 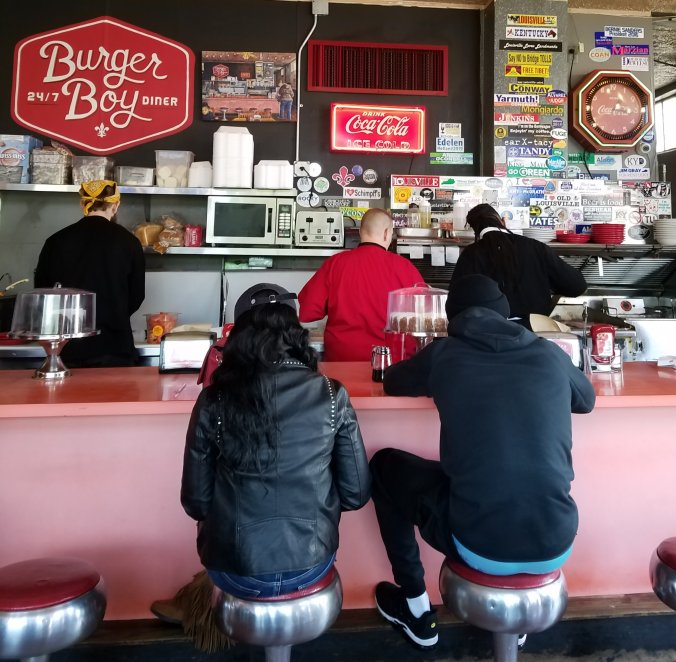 I was having breakfast in one of my favorite hamburger joints, Burger Boy, down on Burnett, when I looked up from the book I was reading and I noticed a single black female, short in stature, with long black hair and fake eyelashes sitting with her back to me at the lunch counter. She was wearing a black ball cap and a black leather jacket. The jacket had silver studs on the collar and along the half circle of each of the shoulders. She had on tight blue jeans and brown suede fringed moccasins that went half way up her well-shaped calves. There was a red leather purse with a gold chain sitting on the counter in front of her.

She kept glancing at her cell phone as she patiently waited for her food too to arrive. She got it to go. When it came, she picked up the white plastic bag the waitress had placed before her and she stepped away from the counter.

It was then that I witnessed the full effect of her great beauty as her face came into full view. She then made her way to the front door and departed. It was a moment. 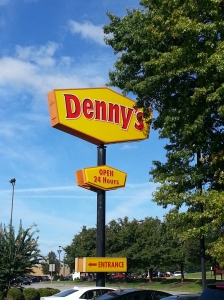 Sunday September 20, 2015. Breakfast at Denny’s. Ordered the Santa Fe Skillet. Two eggs over easy. When I was a teenager and later a young man living in Louisville many years ago we would often go to the Waffle House after a late night out on the town. After I left Louisvile I never entered another Waffle House for 30 years. Never had the desire nor the inclination. Upon my return a few years ago several of my friends began waxing eloquent extolling the virues of eating at the Waffle House. They talked it up so big that my culinary curiosity got the better of me and I yielded to temptation. I actually visited a Waffle House one Sunday morning near where I live.

Big Mistake! It was just as awful as I remembered it. I barely made it home in time before my body nearly betrayed me, if you know what I mean.

So now, I just go to Denny’s. It’s not much better but it’s sufficiently middlebrow and the food is not bad especially the new skillets. I like Wid Eggs but they are really expensive, usually too crowded and a lit bit pretentious for my taste just have breakfast.

Louisville doesn’t exactly abound in Diners, which is actually my preferred place to eat. But I did recently find one in Old Louisville that I like. It may just become my new favorite place. I’s a joint called Burger Boy. Food’s good and they serve breakfast 24/7. It is loaded with atmosphere and intesting characters. My kind of place.

Coming up For Air

The Seven Factors of Awakening

If Wishes Were Horses

The People of Costa Rica

Someone to Watch Over Me