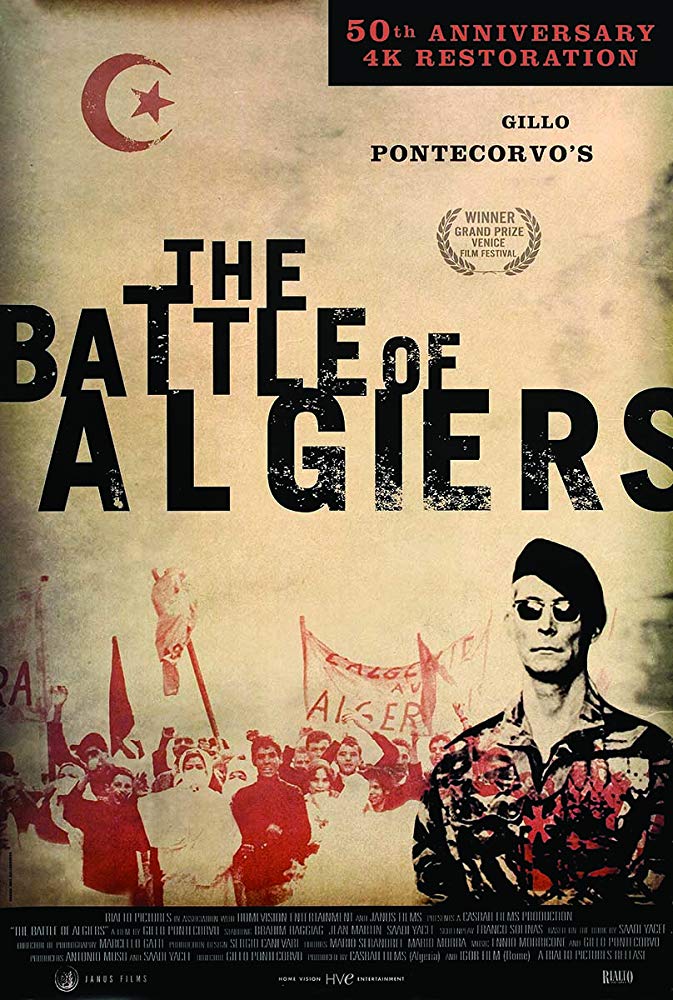 This film has been ranked in the top 100 films ever made. It was banned in France for five years where it was finally released in 1974. The Battle of Algiers is an important commentary on guerrilla warfare.  Revolutionary guerrilla fighters holed up and grouped together in cells in the Casbah section of Algiers. French paratroopers attempted to wipe them out. The movie is about this struggle and the methods used by both sides.

The tactics of the National Liberation Front (FLN) guerrilla insurgency and the French counter-insurgency are shown in the film. The French colonial power committed atrocities against the civilian population of their Algerian colony and the colonized insurgents committed atrocities against the civilian population of their oppressors in a spiraling escalation of violence. The FLN engaged in acts of terrorism by placing bombs in public places such as restaurants, nightclubs, and airports, indiscriminately killing civilians in the European Quarter.  The French paratroopers tortured, intimidated, and murdered members of the FLN. The use of waterboarding as an interrogation technique is depicted.  Algeria eventually won its independence in 1962.

Some of the scenes that really struck me were the incidents of waterboarding by the French Paratroopers, the men of the FLN covering themselves in burqas like women to disguise themselves and escape detection,  FLN women dressing like European women and carrying bombs in baskets, and in the end the women ululating in victory when Algeria won its independence.

The Battle Algiers is as relevant today as it was in 1965.The film was screened by the Pentagon in August 2003 as a field guide to fighting terrorism. Former National Security Advisor, Zbigniew Brezezinski, said: “If you want to understand what is happening right now in Iraq, I recommend The Battle of Algiers.” This film was also used by the Black Panthers as a training film. I am sure there are other terrorists groups that have been influenced by the film as well. The Boson Bombing suspects come immediately to mind.

The film, shot in black and white, is a triumph of realistic production values and heavily influence by Italian Neorealism of the 1950’s. It was filmed on location in Algiers using the real locations in the European quarters and the Casbah. It was so realistic that Pontecorvo had to issue a disclaimer that not one foot of documentary or newsreel footage was used in his two hours of film. Everything was shot live.

The film was nominated  for Academy Awards for Best Foreign Film, Best Screen Play, and Best Director. It was the winner of the Venice Film Festival Golden Lion Award.

2 thoughts on “The Battle of Algiers”