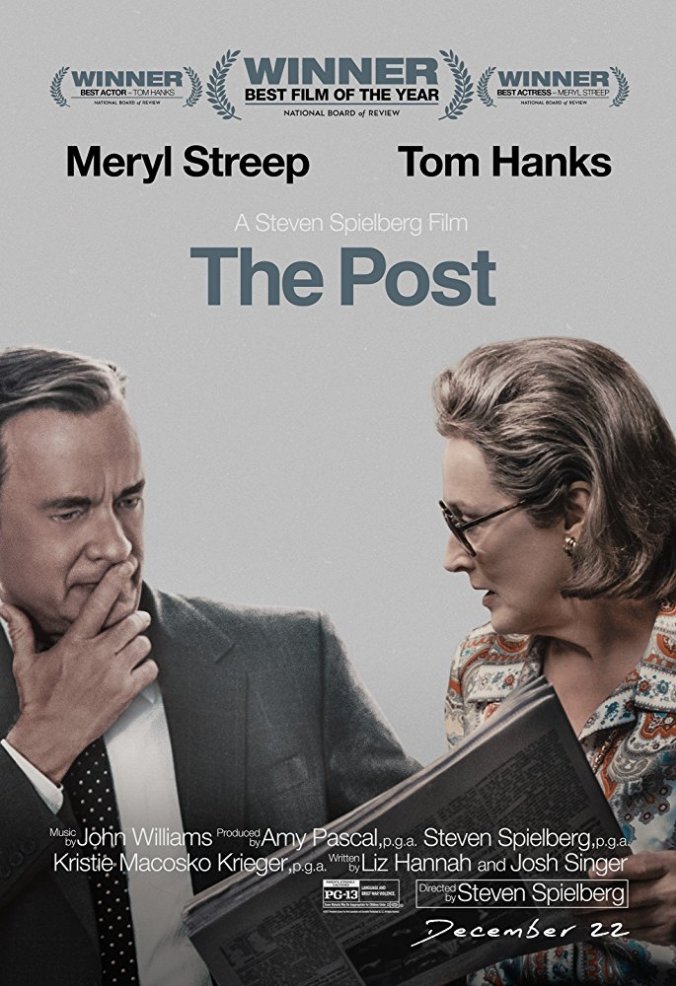 I just love newspapers and movies about newspapers.   The Post (2017) rivals some of the best pictures from the past such as Citizen Kane (1941), The Front Page (1974), and All the President’s Men (1976). The Post probably has more in common with All the President’s Men than the others because both movies are about the same newspaper, the Washington Post, and the subject matter was similar; political intrigue. As a matter of fact, the Watergate break in happened the very next year after the publication of the Pentagon Papers and resulted in the resignation of an American president, Richard Nixon. But that is another story and another movie.  These movies show the power of the press and its importance in American society. Justice Hugo Black once said, “Only a free and unrestrained press can effectively expose deception in government.”

The Post gives us a nostalgic look back at what the newspaper business used to be like. From the loud, busy, bustling news room to the Linotype operators and the press room, it was a miracle they were able to get a paper out on time as it was such a huge undertaking. Things have changed in the world of journalism since the advent of computers and the internet, but I found it fascinating to see the actual operation of getting a paper out on deadline. I’ve seen it before in real life. As a young Loss Control Representative two of my accounts were the Louisville Courier-Journal and Standard Gravure. Together they published two daily newspapers. It was my job six times a year to inspect their entire operation. It was a fascinating and exciting process to witness.

The Post is concerned with the publication of the infamous and so-called Pentagon Papers. When American military analyst Daniel Ellsberg (Matthew Rhys) realizes the extent of the US government’s deception regarding the Vietnam War, he copies top-secret documents that would become the Pentagon Papers.  Ben Bradlee, editor of the Washington Post, played to perfection by Tom Hanks, discovers the New York Times has scooped them with an explosive expose on those papers. Nixon gains a court injunction on the New York Times prohibiting them from further publication of the Papers or what they have learned from them. Bradlees finds Ellsberg and obtains copies for himself and talks the owner of the Washington Post, Katherine Graham, into publishing them. Meryl Streep plays Katherine Graham in one of her best performances in years. The case goes before the Supreme Court and a ruling in favor the Times and the Post is rendered. One justice was quoted as saying, “The court rules in favor of the governed, not the governors.”

Steven Spielberg is not my favorite director, but that is just a matter of personal taste. He is unquestionably an American master filmmaker. I loved his Indiana Jones series and Close Encounters of the Third Kind. But His masterpiece, in my opinion, was and always will be, Schindler’s List. The Post comes in a close second.