The Act of Killing is a documentary type of film that depicts former Indonesian death squad members reenacting their real life mass killings from the 1960’s. These older gangsters were encouraged to choose their own film genre in which to reenact these murders. The film was directed by Joshua Oppenheimer and Anonymous.  I found it very interesting that much of the rest of the crew was listed as Anonymous. The executive producers of the film were Werner Herzog and Errol Morris.

The resulting effect of the multiple genres chosen by the older gangsters was quite surreal and jarring. These gang members were common thugs who were influenced by American movies like Scarface and The Godfather. They imitated their movie heroes such as Al Pacino and Marlon Brando. The word “gangster” was said to be the Indonesian word for “free man.”

Many of the gangsters admitted the killings were wrong and some suffered from gruesome nightmares from the past killings. But some did not think what they did was wrong since they were never held accountable and were even praised for what they did and still receive praise to this day. They killed with impunity Chinese, communists, and whoever opposed the authoritarian regime of General Suharto. In one particularly chilling scene, a gang member describes destroying a village and raping its inhabitants, saying 14 year old girls were the best. 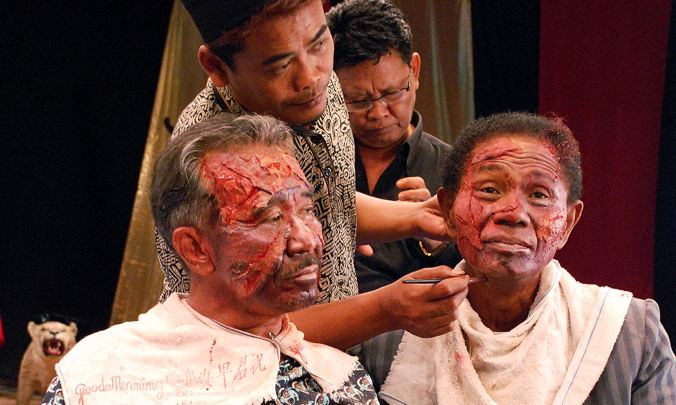 A riveting and telling documentary some are calling a masterpiece is a must see film about events most people have either forgotten or have never heard about: the genocide of upwards of 1,000,000 people in Indonesia on the 1960’s.  This film is a grim reminder of the evil that lurks in men’s hearts and of the banality of evil that allows such horrific events to occur.

Representative Alexandria Occasion-Cortez, of New York, recently called the U.S. detention camps for migrants “concentration camps.” She caused quite a stir by so saying. I have been saying the same thing for months. I feel that it is a complete moral outrage for the American government to detain these men, women, and children in these camps.

Now we are arguing over the terminology. In my view a thing ought to be called what it is. And these camps are clearly concentration camps. The meet the technical definition. Historian Andrea Pitzer has made the same assertion in her piece in Esquire magazine: “The United States has created a concentration system.” She argues that mass detention of civilians without a trail was what made these concentration camps.  The full text of AOC’s tweet reads as follows: “This administration has established concentration camps on the southern border of the United States, for immigrants, where they are being brutalized with dehumanizing conditions and dying. This is not hyperbole. It is the conclusion of expert analysis.”

Strange bedfellows Liz Cheney and Bill Maher condemned the remarks as being emotionally laden with memories and connotations of the holocaust. Masha Gessen, writing in the New Yorker, says this is a failure of imagination. We don’t’ want or cannot imagine a world where we as a people would be evil enough to place human beings in the same predicament as the Nazis did in WWII. Well, I agree with Green and I disagree with Bill Maher. Maher every once in a while, strikes a sour note and sings out of tune. It is surprising coming from a fellow who wears his political incorrectness on his sleeve like a red badge of courage.

These camps meet the technical definition of concentration camps, and so what if it brings up images and memories of the holocaust? It doesn’t devalue it. Rather, it shrieks out a warning, do not go there! It should be a warning that this is what we are capable of, the same thing the Nazis did in WWII. This what Hannah Arendt describes as the banality of evil.

We have to have the moral imagination to realize what we are doing is wrong and can lead to greater evil. We need to make a course correction now!

As soon as some men are willing to serve good with the same stubborn and indefatigable energy with which other men serve evil, the forces of good will be in a position to triumph – for a very short time, perhaps, but still for a time and that triumph will be unprecedented.