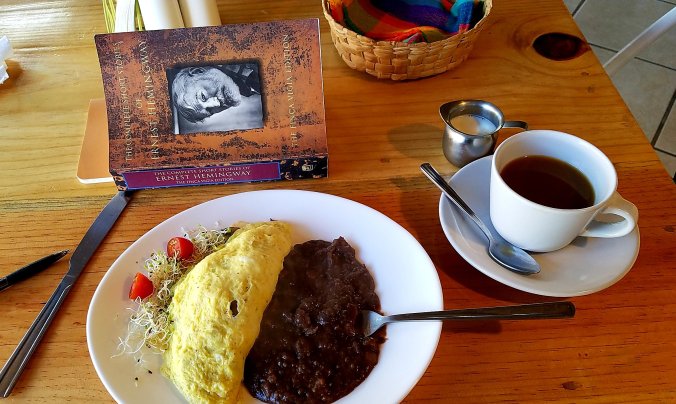 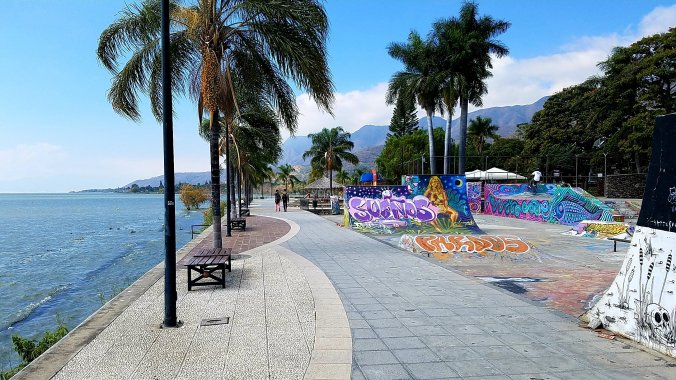 Walked with Buddha to the Malecon. He played his guitar. A couple of Mexican boys kept coming up to us on their bicycles to listen to him play. Then they would ride off again making big circles and come back again and stare at Buddha with a hangdog look as if to say, “What are you doin’ here, man?” 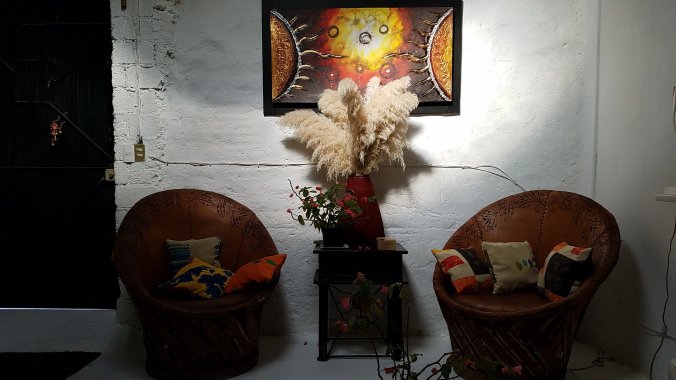 Norma’s husband died today. She works for my host, Luis. It is very sad. Norma is a fine woman and a hard worker. Now her life will change dramatically. It is a sad reminder that tragedy can strike anywhere and anytime. Life can come to an abrupt end without warning. 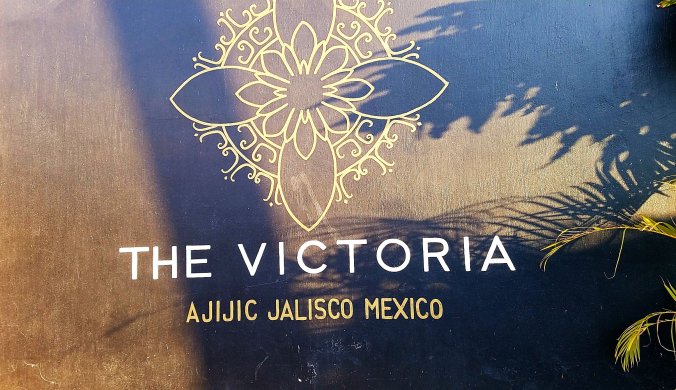 Later in the day I went to a Happy Hour with Buddha at the Victoria Hotel. All they served was beer and Margaritas. I had had my fill of beer already and I didn’t want a  margarita. The bartender, a young ginger in a red t-shirt, tried to fix me a martini. It was awful. It was undrinkable. So, I sent it back. I drank nothing right then, but socialized a bit with the crowd at our table. There were a couple of parties going on tonight but I passed on both. Instead I walked back to the Malecon and took some pictures of the sunset. 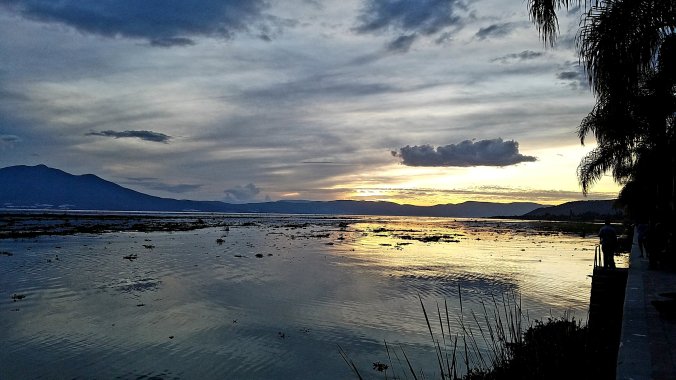 Sunset on the Malecon

Later, I was walking back to my place and I stopped in a little bar called La Tia. It had a Mexican flag and an American flag draped either side of the entrance. Music was pouring out so I hustled there inside. 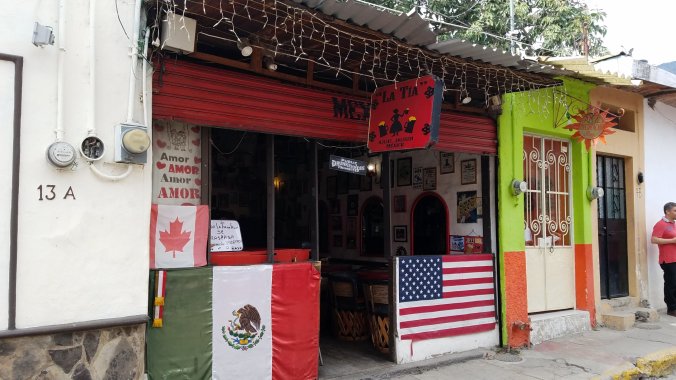 There was a gentleman sitting on a bar stool in the middle of the bar. There was a couple sitting at a table towards the back. I went in and sat a couple stools down from the guy at the bar. 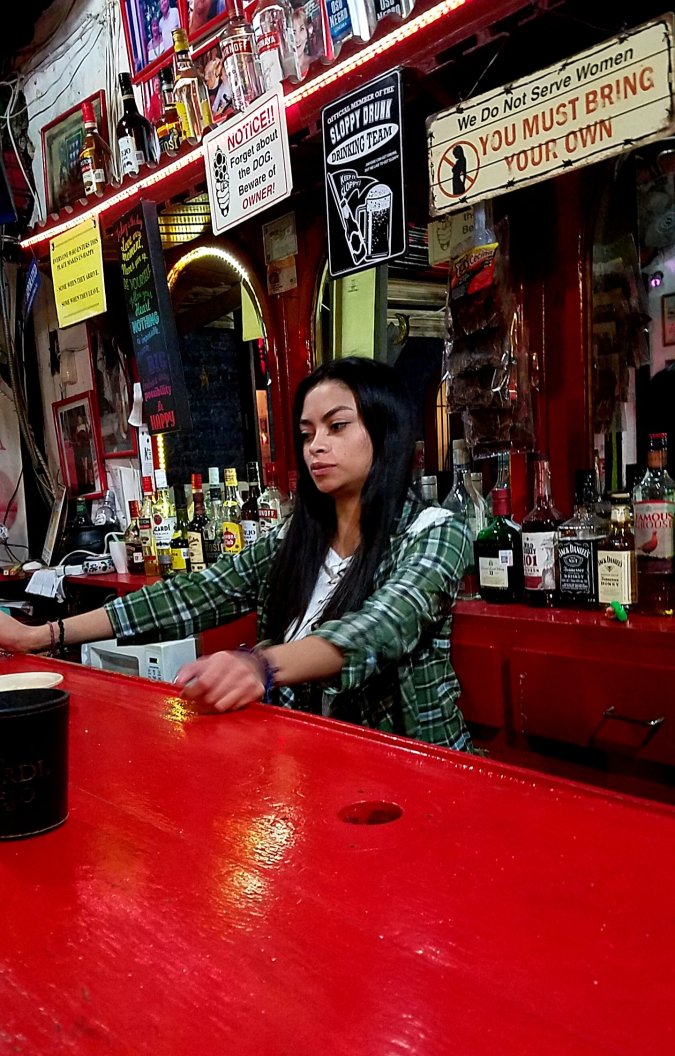 Anna: “Do you want to play a game Benn?”

A cute little Mexican bartender flashed me her pearly whites. “What would you like to drink?” She asked in perfect English.

She got me my beer and set down in front of me and went back to her perch. She was talking to the other guy but he turned to me and included me in the conversation. Turns out he was from Oregon and was meeting his girlfriend later. He was drinking beer and had a shot of tequila sitting beside his bottle of beer.

We all got acquainted and had a nice conversation. The girl’s name was Anna and I was becoming quite taken with her. I snapped a few surreptitious pictures of her.

“It’s called 21. You roll the dice. There are three winners. One who calls the shot. One who pays, and one who drinks the shot. Do you want to play”?

So we each took a turn in rolling six or seven dice out onto the bar from a leather cup. Each time Anna counted the tops of the dice. I won the  first roll so I called the shot.

“What shot do you want?” she asked pointing to the bottles of tequila behind the bar.

“What are you drinking?”

She pointed to a bottle. 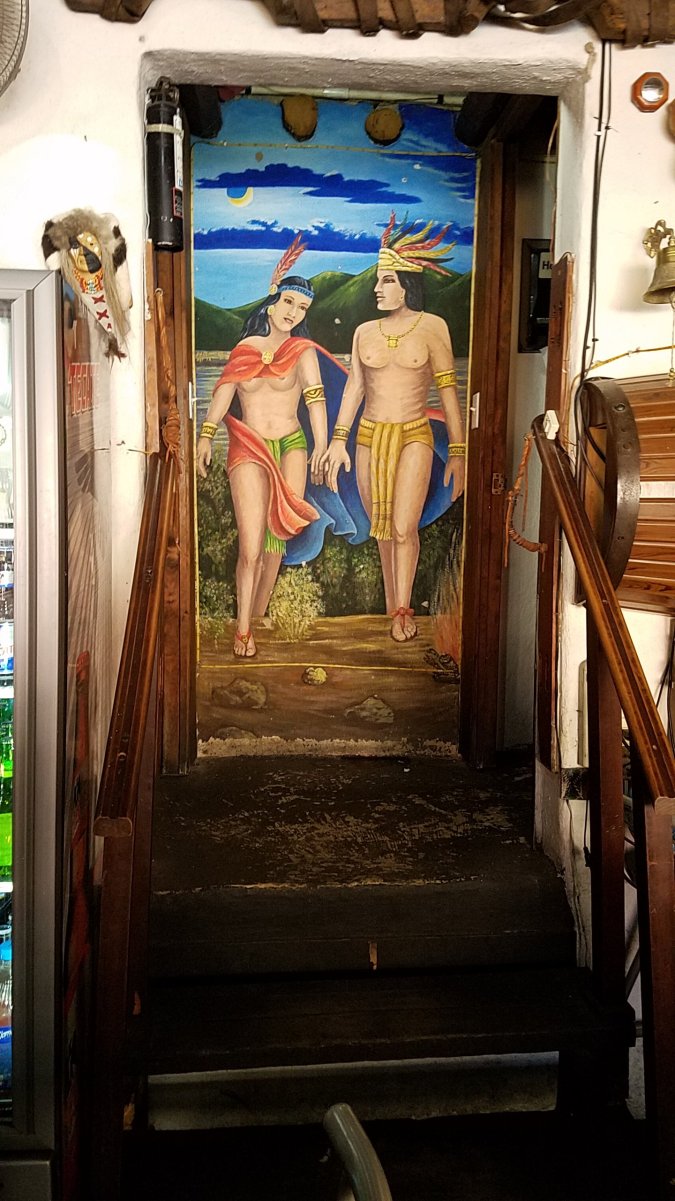 She poured out a shot and set it on the bar in front of us. We rolled some more. First the guy from Oregon, then Anna. At the end of the game the Oregon guy drank and paid for the shot I called. We all laughed and he left. So now I had Anna all to myself. We talked a little more and I told her about a New Year’s Eve Party I was going to at Perry’s Pizza. She said she had been there before and that the food was good. I asked if she had plans for New Year’s Eve. She said no. I asked If she would like to come with me to the party as my guest. She said she would.  Hallelujah! Now we are talking! So we exchanged telephone numbers and became friends on Facebook so we could use messenger and sure enough she showed up at the party and we had a great time! 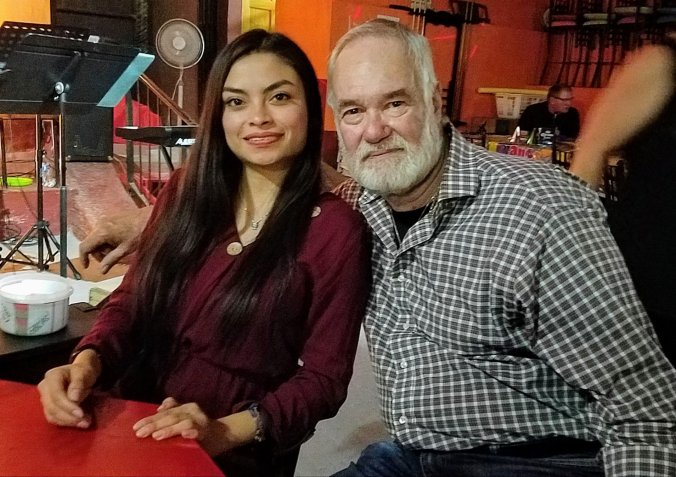 She’s a beautiful girl and I went back to bar several more times to see her.