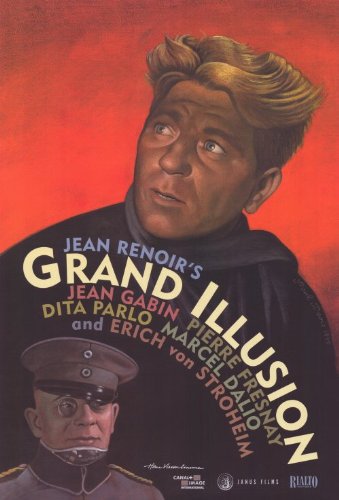 La Grande Illusion, directed by Jean Renoir, is a must-see film for anyone who is a serious film lover. It is considered to be Renoir’s masterpiece and has made many critic’s lists of best films ever made, including mine.

The film is about a group of French prisoners of war in two German camps during World War I. There are officers in the group that includes an aristocrat, a wealthy Jewish banker, a music hall actor and a mechanic. Pretty much a cross section of French society.

These officers make several escape attempts. Their last attempt to tunnel out is interrupted when they are transferred out to another camp before they can complete the tunnel. They are sent to a fortress called Winterborn from which no one has ever escaped. This camp is run by a German aristocrat named Captain von Rauffenstein (Eric von Stroheim).

The French aristocrat de Boeldieu (Pierre Fresnay) forms a bond with Captain Rauffenstein but sacrifices his life in order to help his fellow officers, working-class Maréchal (Jean Gabin) and the wealthy Jewish banker Rosenthal (Marcel Dalio) finally escape. These class distinctions are essential to the story and are part of the overall theme of the illusion of class barriers which artificially separate men in society. The themes of race and ethnicity are also explored. The men are rescued by a German widow, Elsa (Dita Parlo), and eventually make it across the border to Switzerland.

La Grande Illusion is an anti-war film in which the main thesis is the futility of war. It relies heavily on ideas from the book The Great Illusion by Norman Angell published in 1909. Angell argued that the cost of war was so great that no one would risk starting a war because the result would be disastrous. Of course, this proved to be illusory.

The title of the movie seems to have multiple layers of meaning. The futility of war, the artificial boundaries between men in class distinctions and even the artificial and invisible borders between countries. In the last scene of the movie as Maréchal and Rosenthal make their escape into Switzerland across a snowy mountainside a German patrol spots the men and fires shots at them. The order is given to stop shooting as the prisoners are over the border into Switzerland. The camera pans down the mountain side to the two men. Marechal asks, “Are you sure we are in Switzerland, it’s so alike?” Rosenthal, who has a map, says, “Of course. You can’t see frontiers. They were invented by men. Nature doesn’t care.”

This is a movie that has definitely stood the test of time in every way.

Is that a Dagger I See Before Me?